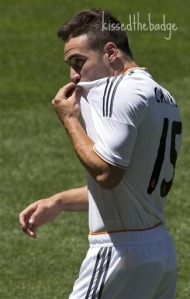 Unlike Isco, who refused to kiss the badge, Daniel Carvajal was obedient on his unveiling and repeatedly showed love to the badge.

Growing up in the suburbs of Madrid, he signed for their youth team when he was just 10-years-old. However, after failing to make it in to the first team he signed a five-year-deal with Bayer Leverkusen. They put a buy-back clause in to his contract though which they used to resign him a year later.

Bayer’s Director of Football, Rudi Völler, said: “Real Madrid noticed the outstanding performances by Dani this season, and it was only a matter of time before they exercised their buy-back option.”