After putting Portugal 1-0 up in their second Euro 2012 game, Pepe was seen celebrating grabbing and kissing the badge.

“I’ve already made it clear how much love I have for Portugal,” he said two years ago. “I feel more Portuguese than Brazilian. I feel this country and I still owe so much to the people.”

Portugal’s badge isn’t the only one Pepe’s lips are familiar with though, with the Real Madrid defender happy to kiss his club’s badge too.

Here he is kissing the badge at half-time as he walks off the Nou Camp pitch in the Copa del Rey semi-final. 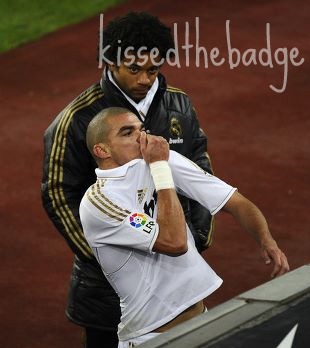