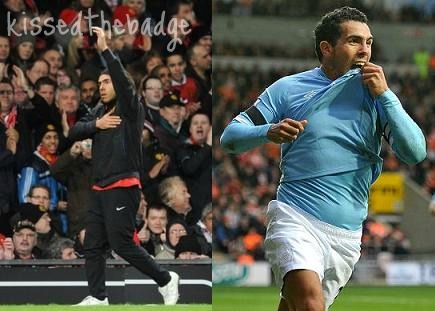 “I cannot ever imagine leaving Manchester United,” he said. “I am in the perfect situation. My relationship with the club is perfect. Patrice Evra is my closest friend but the feeling I get from all the players is something I’ve not experienced before. I want to get the contract sorted and play for United for the rest of my career.”

But then he signed for local rivals, Manchester City…

“I respect United fans because they supported me from day one and I think they will understand my decision,” he said after making the move. “I have had big challenges throughout my life and now I am ready for another. City is a big project but I am excited. We have the best attack in Europe – Robinho, Santa Cruz, Adebayor, Wright-Phillips.”

Tevez was adored by the Manchester City fans and scored an impressive 52 goals in 81 games, as well as helping them win the FA Cup.

However, after refusing to come off the bench to help City in a crucial Champions League game against Bayern Munich, the Argentine striker went AWOL.

Roberto Mancini was less than impressed with his star striker’s behaviour and claimed that his career with the blues was over.

“For me, if a player plays for Manchester City in the Champions League and earns a lot of money and does this, then he can never play for me again,” he said. “I have helped him for the last two years and I can’t accept this from him. For me, he’s finished. I cannot go on with him. If I decide these things then he’s finished. I have helped him and now he’s refused to play. At Bayern Munich, do you think this would happen? Would it happen at Milan or United? I am the manager and I make the decisions and in my opinion he can’t play for me again.”

Six months later, Tevez is on Manchester City’s bench again as his team take on Chelsea.

“He wants to play and deserves to play and help the team,” Mancini said ahead of kick-off. “I have always thought Carlo is a top player, even when we had the problem.”

One thought on “From red to blue – Welcome to Manchester, Carlos”