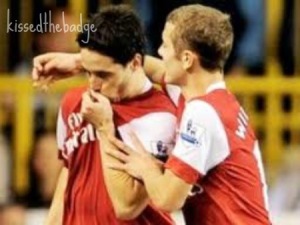 Two months after signing a contract extension with Marseille, Samir Nasri signed for Arsenal. He was seen kissing Arsenal’s badge after scoring goals against Tottenham Hotspur and dismissed rumours linking him away from the club.

“There is not much to say apart from don’t listen to all the rumours and everything that is written or said,” he said in June 2011. “In terms of talent, I feel we had the best squad of the whole league. We played the best football. We were the best team, even if Manchester United had a good season too. We have improved so much. If the boss adds some good players, I really believe a trophy will be won.”

Two months later he signed for Manchester City. He said: “It is a big relief. It was a long negotiation and discussion between the two clubs and now I am finally a City player. That is what I wanted from the start. I’m really happy. I was a little bit frustrated because I said to the manager I wanted to leave. I stayed for the whole pre-season, but I wanted to do the pre-season with Manchester City.”