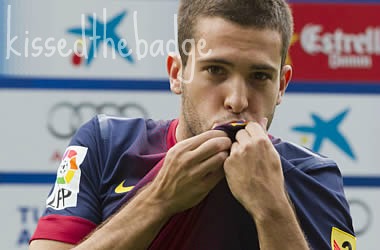 Jordi Alba joined Barcelona when he was just 9-years-old and stayed there for seven years before he was released. He signed for neighbouring UE Cornellà when he was 16-years-old and was soon called up to the Spain U-19 squad. Valencia paid €6,000 for the teenager where he went from strength to strength. He got his first call up to the national team last September and then made his début in October.

At Euro 2012, Alba made 226 successful passes in the opposition half, which was 48 more than any other defender, according to Opta. He assisted Alonso’s goal against France in the quarter-finals and scored a goal for himself in the final, rounding off a brilliant tournament.

Even before Euro 2012 kicked off, Alba was highly sought after both in Spain and the Premier League, with the likes of Manchester United reportedly interested in Jordi Alba to help them replace Patrice Evra. A move to Manchester could well have cemented the Premier League betting title odds firmly in Manchester’s favour again.

However, once Alba knew Barcelona were interested, he wouldn’t hear anything else. Eventually an agreement between Barcelona and Valencia was reached whilst he was on International duty which will see him return to his former club for €14 million.

“I feel no pressure at all,” said Alba. “I played very well at the European Championship both as an individual and collectively (with Spain). And it is a great opportunity rather than a source of pressure to be at the best club in the world. It is clear that the best players in the world are here and I hope to be able to play at the same level. I take it as a challenge. Not as a source of pressure.”