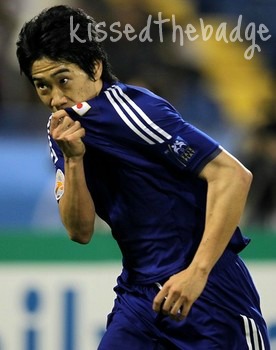 Shinji Kagawa kissed his badge as he celebrated scoring his team’s second goal against Qatar during their 2011 Asian Cup quarter-final. He scored two goals and they won 3-2. In the semi-final against South Korea, Kagawa broke his metatarsal and missed the final where Japan beat Australia after extra-time.